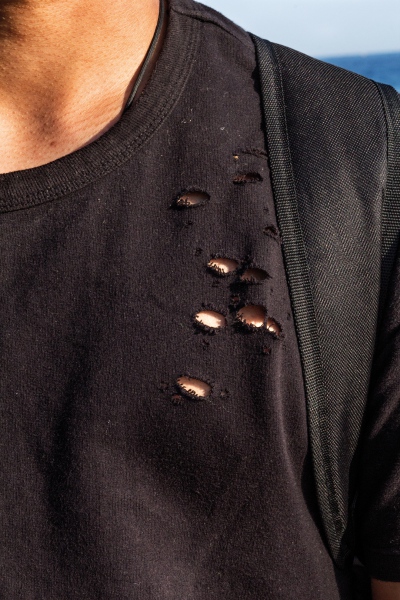 The breaking point referred to in Florine Thiebaud’s photographic series is metaphorical rather than explicit. Her camera doesn’t record critical situations but instead portraits, indeterminate landscapes, interiors, still lives and names carved into tree trunks or rock faces.

The protagonists, a few young men and a girl, are photographed repeatedly in close-up. They usually look away.

The photographer has been allowed to come close but beyond this illusory intimacy — to which photography lends itself so well — we sense, as observers, a wall we cannot breach. We learn nothing about these individuals and yet their physicality, captured by an empathetic camera, is moving.

The title of the series seems paradoxical. We are transported to a Mediterranean region where little happens and everything appears to be transitory. The photographer reinforces the agonising routine of living in a perpetual state of limbo by reproducing similar images and photographing her subjects in situations that differ only subtly. The monotony of drawn-out time is in direct contrast to the disruption promised by the title, but the captions reveal the brutal truth.

As soon as we discover where the photographs were taken, our initial interpretation of the images collapses. These people are refugees and the places are internment camps. Chios, Leros and Athens are temporary stops on an endless escape route. By making stagnation her theme, Thiebaud opposes and nuances prevailing alarmist representations of the so-called “refugee crisis”.